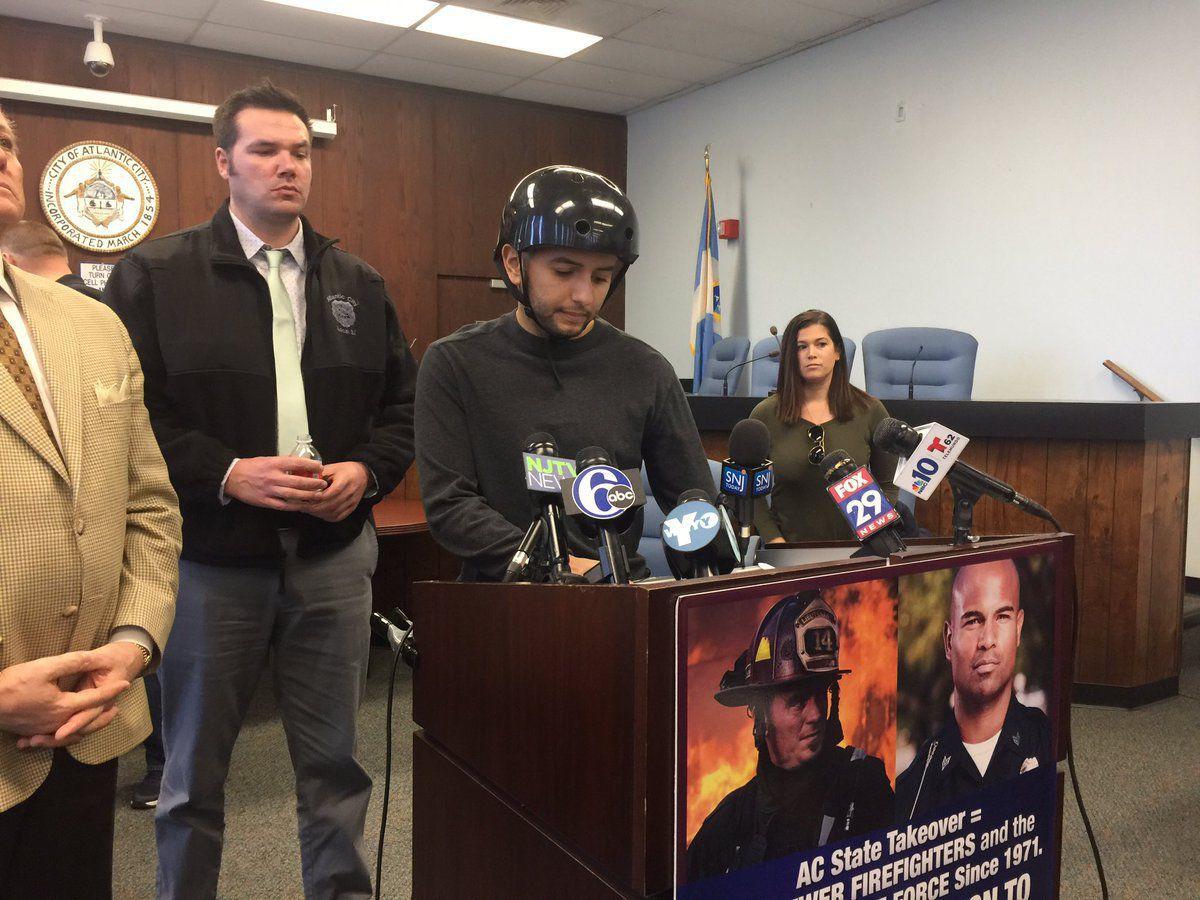 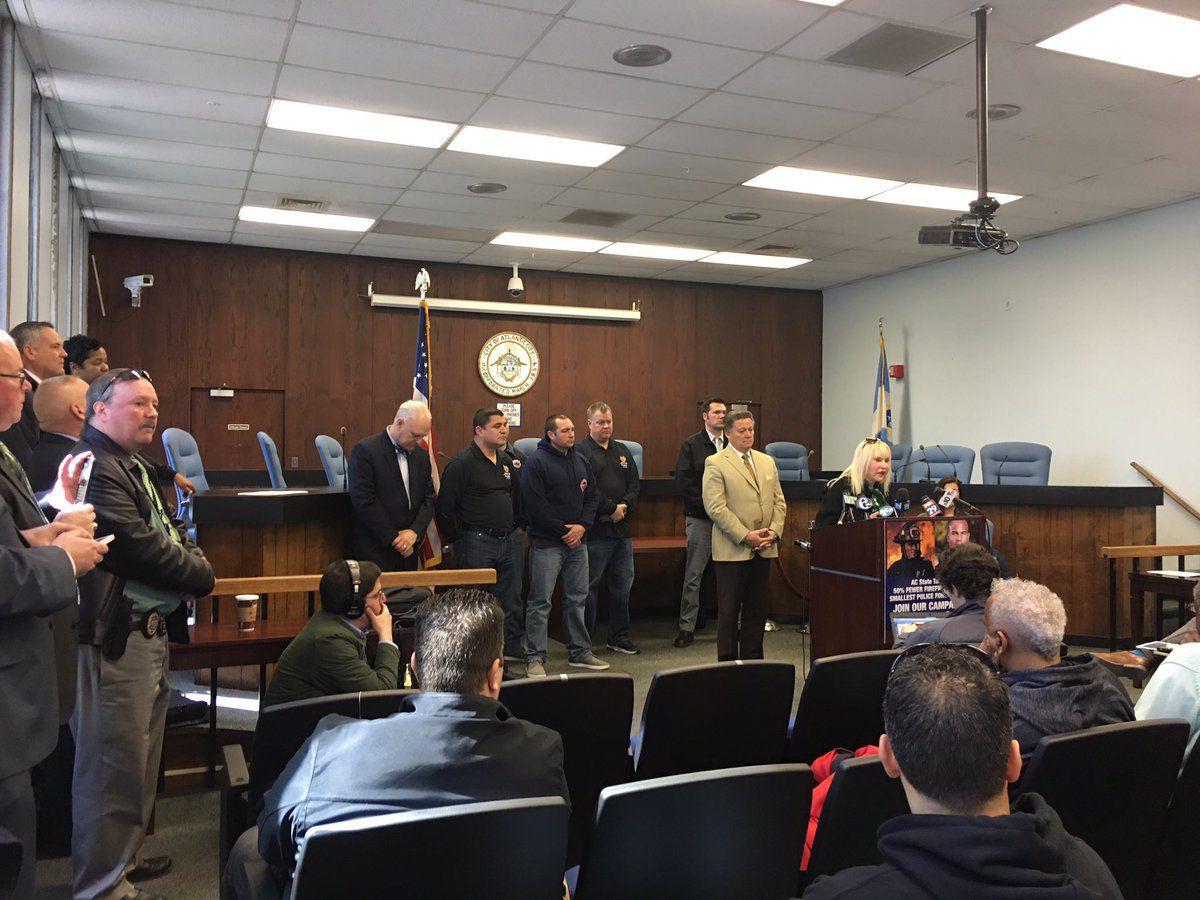 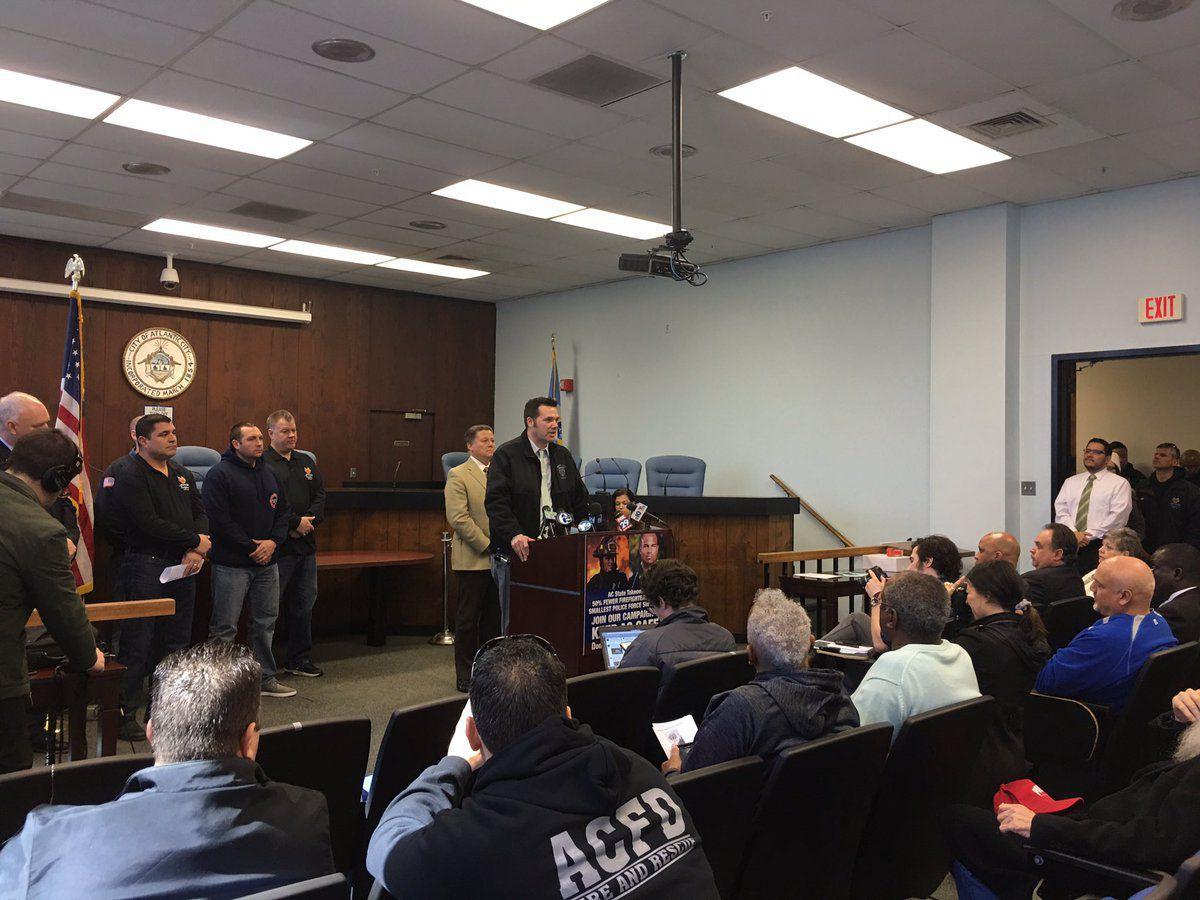 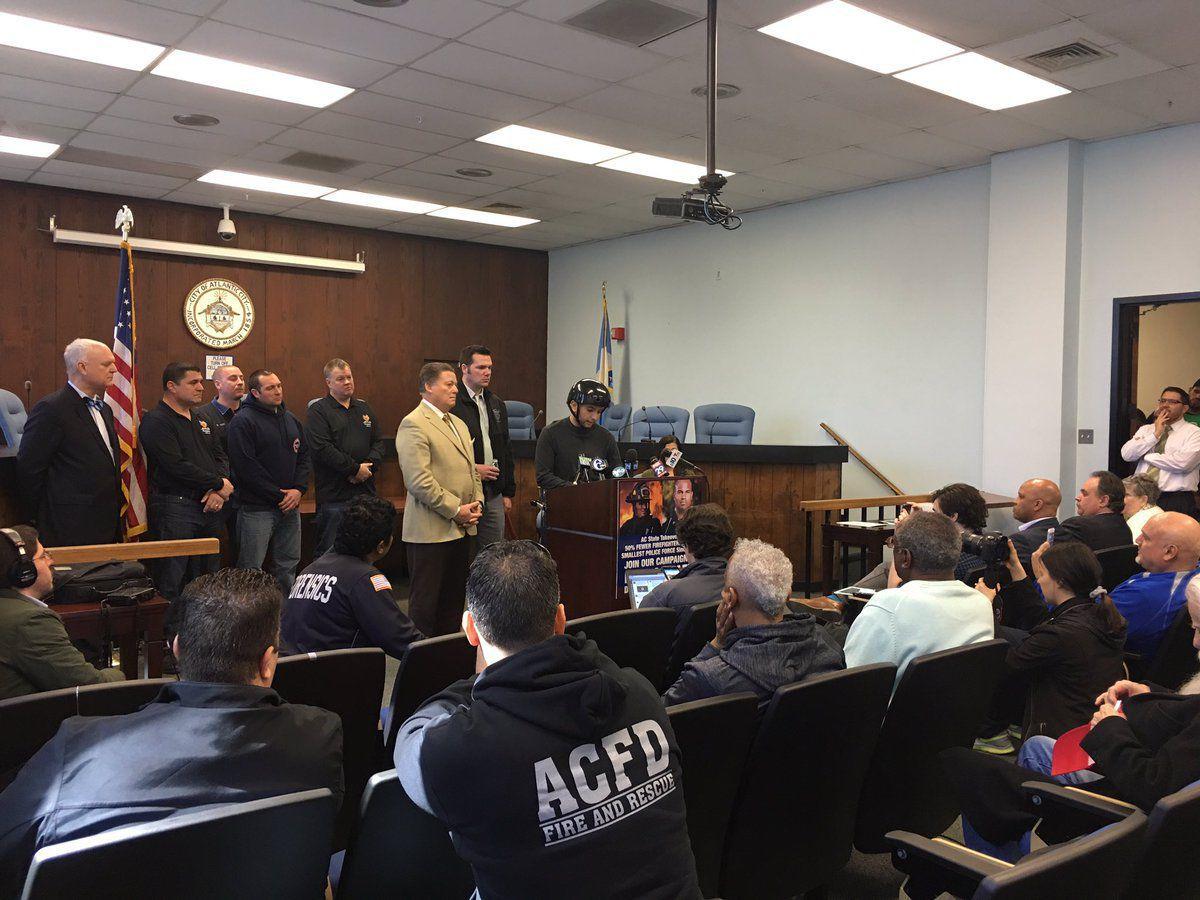 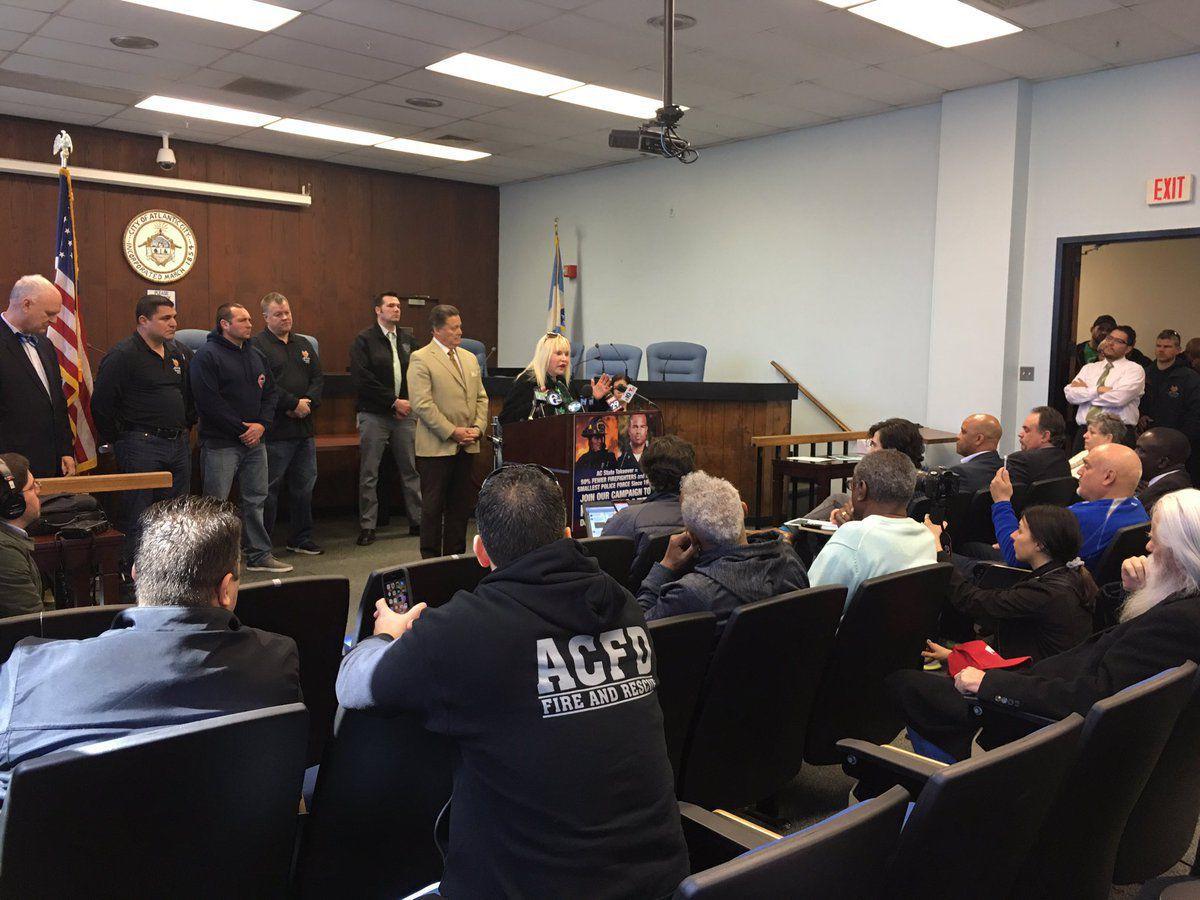 Among the speakers was police officer Josh Vadell, who was shot in the head in the line of duty in September.

Vadell is still recovering from the shooting. Under cuts imposed by the state Wednesday, injured officers would receive 30 percent less in workers’ compensation.

"It bothered me that this was going on, not only to me but to the other employees of the city," Vadell said. "It's my time to support the city that support my family and I."

“He’s certainly not happy about how this is playing out,” Matthew Rogers, president of Police Benevolent Association Local 24, said of Vadell on Thursday. “If something like what happened to him happened to someone else, they would be in this predicament where they would be taking severe cuts just for doing their jobs.”

Asked about Vadell, a state official said he won’t be affected by the cuts in recognition of “his commitment to protecting and serving the Atlantic City community.”

“Sen. (Jeffrey) Chiesa has determined that none of the changes the state is making to the Atlantic City Police Department will affect Officer Vadell,” state spokeswoman Lisa Ryan said.

“Oh ok so each officer that gets shot going forward will we just have to sue to get this same ‘determination.’ Thanks,” the tweet said.

Rogers said the cut to workers compensation was a big issue in the negotiations.

“At one point that came out of their offer,” Rogers said. “As they continuously gave us a proposal back, it found its way back in and when we questioned it, it all kind of fell apart.”

Union representatives and Mayor Don Guardian also will speak at the news conference to kick off the campaign, which will include billboards, direct mail, online advertising and other activities. After the news conference, public safety workers will hand out fliers on the Boardwalk.

State officials overseeing a takeover of the city’s finances want to lay off 100 firefighters and 24 police officers to cut costs in the cash-strapped city. In addition, the state seeks to slash salaries, increase hours and eliminate some benefits.

The cuts to police would save the city $20 million, while the reductions at the fire department would save $14 million, according to the state.

The city’s police and firefighters’ unions have sued the state to block the cuts. A Superior Court judge still hasn’t issued a ruling on whether cuts can proceed while a larger legal case against the state takeover of the city advances.

ATLANTIC CITY — State overseer Jeffrey Chiesa said Friday that lawsuits against him are no more than “money grabs” by public safety unions.

ATLANTIC CITY — The law firm leading a state takeover of the city has billed taxpayers about $280,000 so far, with former U.S. Sen. Jeffrey Ch…

NORTHFIELD — Atlantic County is taking steps to overturn the state takeover of Atlantic City and the PILOT bill.

After years of downgrades, Atlantic City’s credit got a boost thanks to the state takeover.

About four months ago, the state took over Atlantic City’s finances to make them sound and sustainable. After waiting years for someone to do … 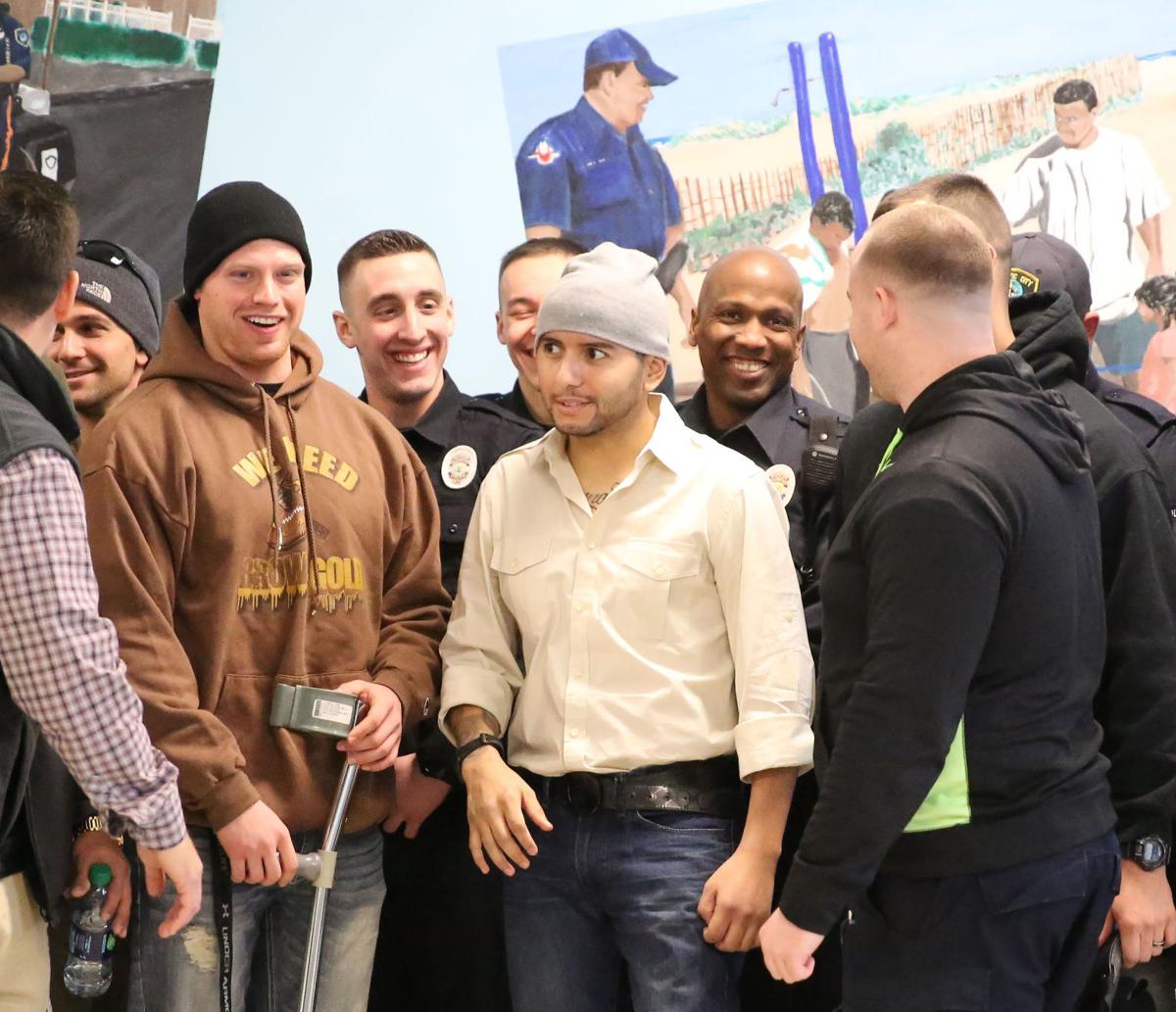