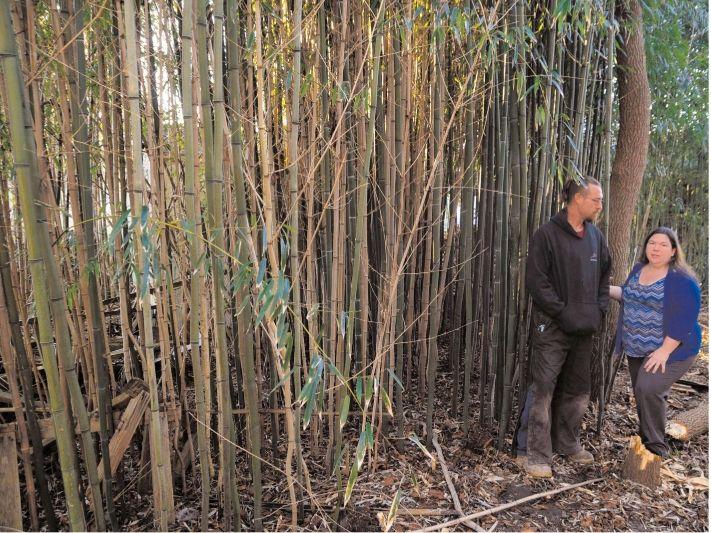 The bamboo that grows on the property where Linda Conner, 39, and Josh Walters, 42, of Northfield, live was there when Conner moved in. The bamboo spread to a neighbor's property, and she has 45 days to pay for removal, which is estimated to cost $15,000. 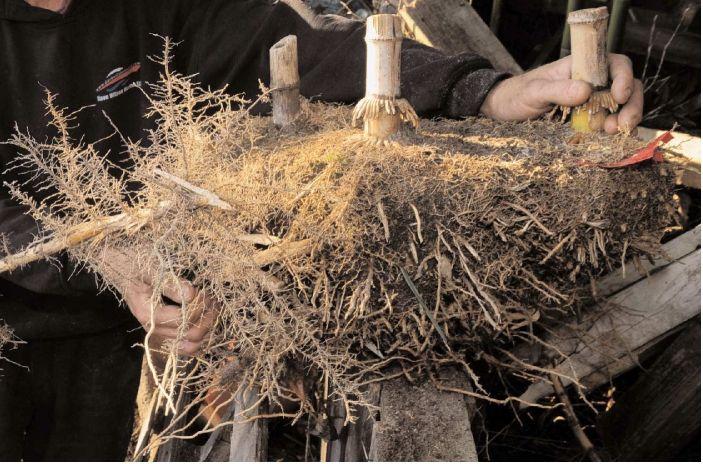 The root system of the bamboo allows the plant to spread quickly and aggressively.

Homeowners burdened with the task of clearing bamboo from their neighbors' property are pushing back against strict timelines and excessive costs.

Lisa Chan, who lives on Ocean Heights Avenue in Linwood, plans to argue in Municipal Court early next year that the city's law isn't enforceable, according to her attorney, Scott Becker, of Pleasantville.

Linwood, which passed an ordinance last December banning the future planting of "running" bamboo within the city, requires homeowners to pay for eradicating the invasive species from neighboring properties within 120 days if requested or face a $100-a-day penalty.

Becker said they don't believe Linwood has the ability to criminalize conduct that may have occurred years before the law existed.

"What you're saying is, 'What you did that was legal, we now pass an ordinance saying it's criminal,'" he said.

Linwood Council President Tim Tighe said City Council is considering amendments to its year-old law due to similar concerns. Tighe said he believes that the city should revise the ordinance to address only new bamboo plantings and leave the neighbor disputes up to a judge.

"Where I'm at right now is no more new bamboo of the spreading-type species, and that's where I want to pull the plug," he said. "The fact remains that you still can't do something to my property and get away with it. We don't need an ordinance for that."

Tighe acknowledged that removing and containing bamboo can be very expensive and time consuming. In addition, proving where the bamboo originated is nearly impossible, he said.

Following in the footsteps of its neighboring towns, Northfield in August passed a law regulating bamboo. Days later, Linda Conner, who lives on Mill Road, said she received a notice from the city that she would be on the hook for removing bamboo from her neighbor's property. A recent cost estimate came in at $15,000.

Conner said that while she agrees with the intent of the law, she is concerned about the cost and the timeframe for removal.

"I don't disagree that the bamboo is very invasive and can do a lot of damage," Conner said. "But once they approve your plan, you only have 45 days to do it."

Conner said she moved in about two years ago, cognizant of the bamboo.

"I am not opposed to doing what needs to be done. I don't think anyone realizes how devastating this is to the other side of this," she said.

At such a cost, Conner said she may have to forgo Christmas for her family of seven.

Northfield City Council President Jim Travagline said council's intent in adopting the ordinance wasn't to burden homeowners with costs but to help solve a big problem for the city.

"It's an issue with a lot of different residents," he said. "It could be a real detriment to a town if it continues to grow throughout the community."

Travagline said he hasn't had any contact with Conner regarding the issue and doesn't know all the facts, but said he believes if she comes to council and shows she is trying to resolve the issue, "something can be done."

Meanwhile, the Chans are set to go to court over their issue Jan. 6. Becker said there is a chance the Chans' issue can be resolved prior to court if their homeowners insurance will pay for the removal of the bamboo.

While he doesn't believe the criminal aspect of the law is legal, Becker said he believes civil actions against a property owner would stand up in court. Contact: 609-272-7251 CLowe@pressofac.com

The bamboo that grows on the property where Linda Conner, 39, and Josh Walters, 42, of Northfield, live was there when Conner moved in. The bamboo spread to a neighbor's property, and she has 45 days to pay for removal, which is estimated to cost $15,000.

The root system of the bamboo allows the plant to spread quickly and aggressively.