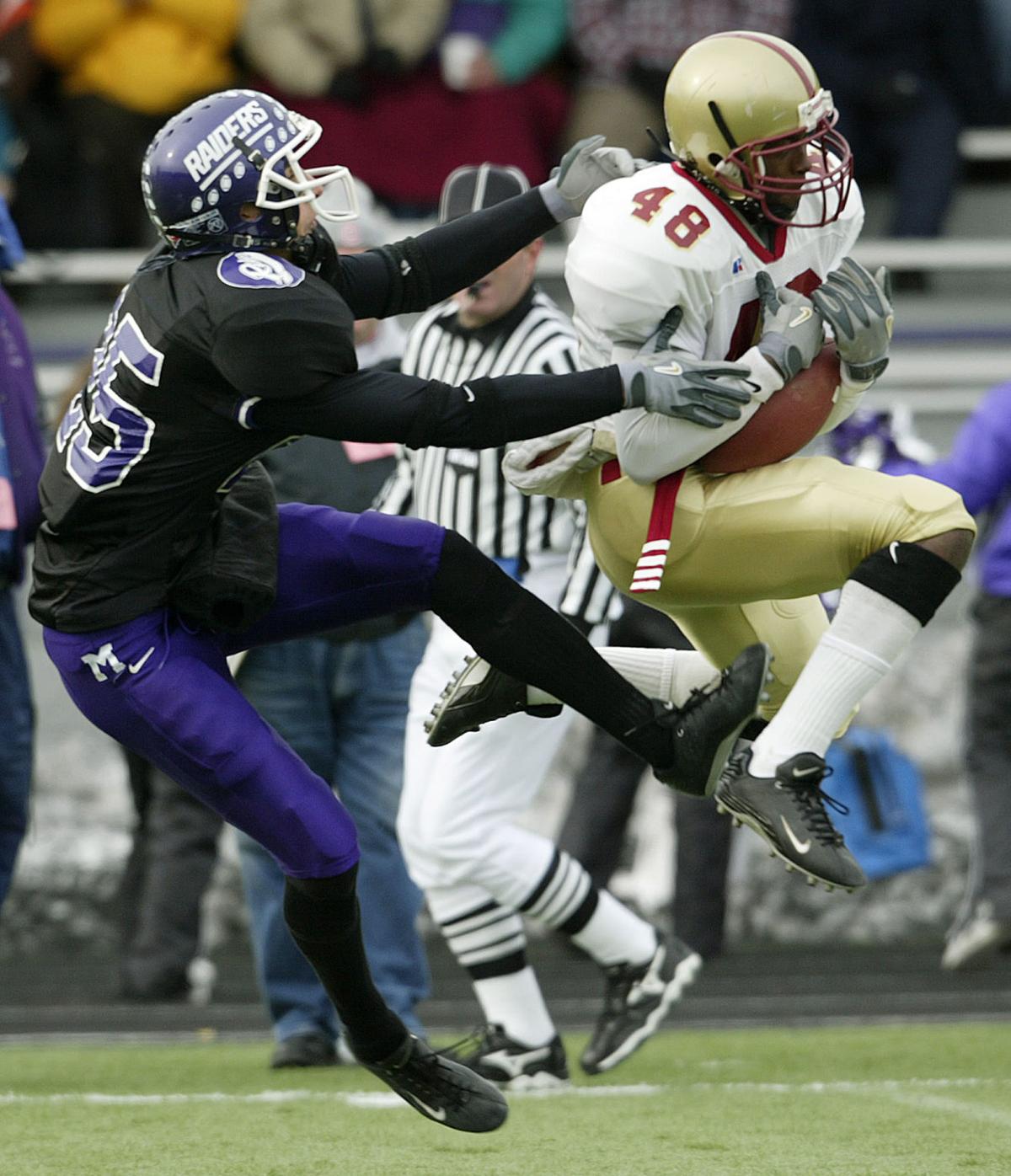 Bridgewater's Steward White, right, grabs an interception in front of Mount Union's Nick Sirianni in the first quarter during the semifinals of the NCAA Division III playoffs at Mount Union Stadium Saturday, Dec. 13, 2003, in Alliance, Ohio. Mount Union won 66-0 to set the NCAA record for most consecutives wins at 55. (AP Photo/Ron Schwane) 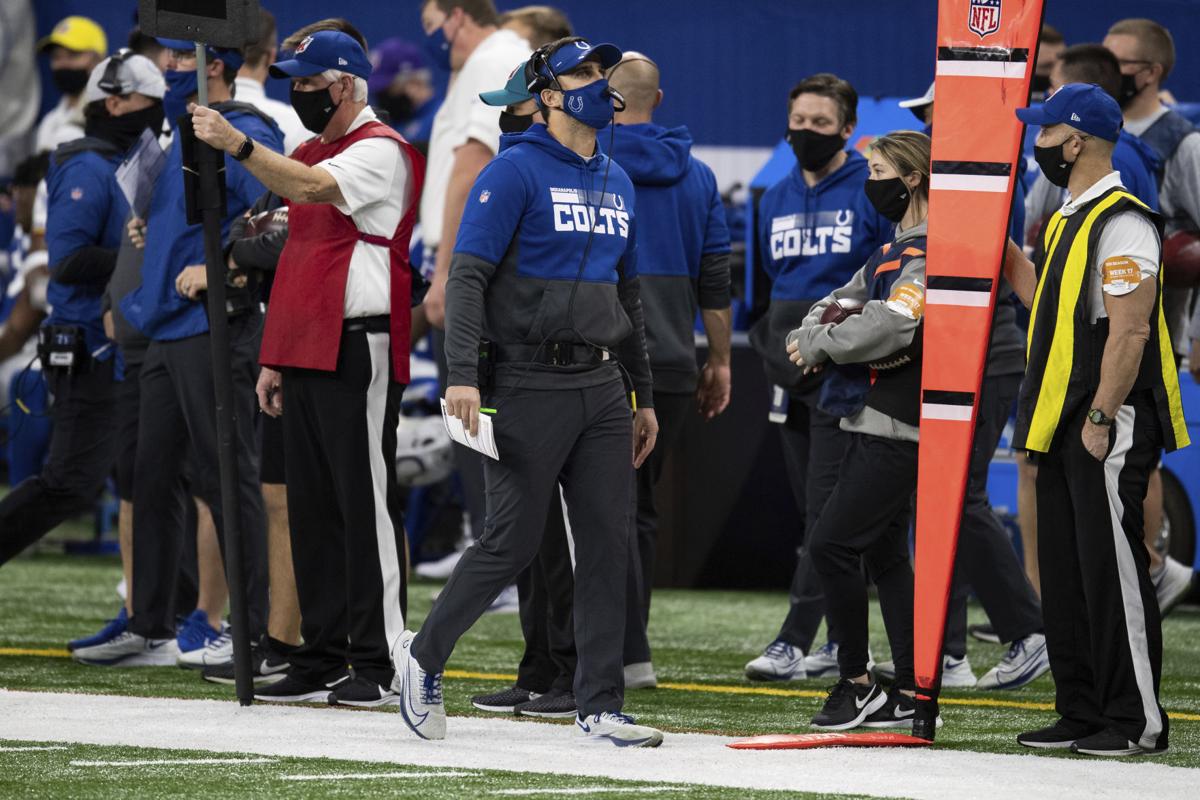 1. He’s 39 and grew up in Jamestown, New York, some 70 miles south of Buffalo, and was a wide receiver at NCAA Division III powerhouse Mount Union. Grew up a Bills fan.

3. He and his wife, Brett, have three children: sons Jacob and Miles; daughter Taylor.

4. Sirianni caught three touchdown passes in a 2003 NCAA Division III semifinal victory for Mount Union. He had never lost a game in college until the Purple Raiders were beaten by St. John’s (Minn.) the following week in the championship to end Mount Union’s 55-game winning streak, a college football record that still stands.

5. Other NFL notables from Mount Union include Dom Capers, Pierre Garcon, Cecil Shorts III and Bill Davis, who coached Eagles’ linebackers under Dick Vermeil from 1976-78 and was the club’s VP of player personnel during the Buddy Ryan era 10 years later.

6. Started coaching at Mount Union after a year playing for the Canton Legends of the Alliance Indoor Football League. Spent three seasons at Indiana University of Pa. before getting into the pros in 2009.

7. Sirianni was a sophomore in college when he just happened to run into Todd Haley while working out at a YMCA in upstate New York, according to the Buffalo News. Sirianni was home on break and Haley, who was the Bears’ wide receivers coach at the time, was vacationing in nearby Chautauqua Lake.

8. Nearly 10 years later, Haley was the head coach of the Chiefs and gave Sirianni his first NFL job as quality control coach for the Chiefs.

9. He spent four seasons in Kansas City (but left before Andy Reid arrived in 2013), five with the Chargers (where he first worked with Frank Reich) and the last three seasons as Reich’s offensive coordinator for the Colts.

10. “When I got here [in 2018],” Reich said in October, “the first thing I said to [general manager] Chris Ballard was, ‘There is one guy we have to get on this staff, and that is Nick Sirianni.’ Thankfully, [general manager] Tom Telesco and the Chargers organization allowed Nick to take our coordinator position. I was grateful for that.”

13. Colts rookie running back Jonathan Taylor (Salem H.S.) ran for 1,169 yards and set the team single-game record with 253 yards in Week 17 against Jacksonville.

14. His brother, Mike Sirianni, is 156-36 as the head coach of Washington & Jefferson, a Division III school outside of Pittsburgh.

15. Sirianni’s father and another brother also have been head coaches in high school or college, but Nick had always been an assistant. Until now. “I’m kind of the outcast of the family,” he joked to the San Diego Union Tribune in 2016. “I’ve got to catch up to that.”

The Philadelphia Eagles’ coaching staff is beginning to take form.

Bridgewater's Steward White, right, grabs an interception in front of Mount Union's Nick Sirianni in the first quarter during the semifinals of the NCAA Division III playoffs at Mount Union Stadium Saturday, Dec. 13, 2003, in Alliance, Ohio. Mount Union won 66-0 to set the NCAA record for most consecutives wins at 55. (AP Photo/Ron Schwane)